The 2010 Gold boys team have won the 2022 Jeff Bush Memorial tournament in their first 11v11 competition.  The boys had moved up to the U13 age group to try out their full size field legs and ended winning the championship. 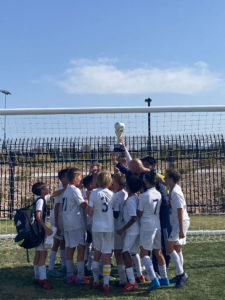 The 5 team group play kicked off with DLVSC playing a close match against Villareal Las Vegas Academy 2-1. The boys then easily dispatched St. George FC 5-0.
On Sunday, the key matchup against Heat FC saw the team come out blazing and defeated their opponents 9-1 in a score that would have a lot of meaning later in the day.  In the final game of the day, the team came up against Lions Den FC.  Because of their significant win against Heat FC, the boys only needed a draw to bring home the championship.  The game ended 1-1 and the team playing in their first 11v11 event against U13 teams won the championship.
Congratulations to the boys and their coach Adam Siqueiros, with assistance from Dan Schell 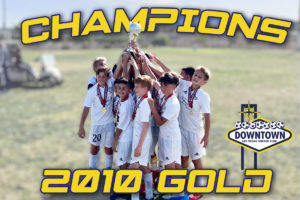